Change of Plan: Revising Your Story as You Go by Nevada McPherson 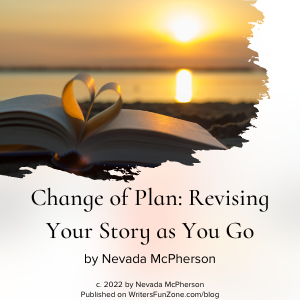 Let’s welcome back monthly columnist Nevada McPherson as she shares with us “Change of Plan: Revising Your Story as You Go.” Enjoy!

Sometimes even if you have a plot figured out for a story, you need to change course based on new information.

Whether it’s research, some new realization, or even if you have a character who takes you in a different direction than what you originally expected, you have to adjust accordingly.

Whether you’re a “pantser” or a planner, you have to be prepared for those occasional changes.

I have an outline and most of a draft for the next book in my series, but I can see changes that will have to be made before I continue.

In a couple of cases, I had a Plan B, and had already had to make a choice which way to go, kind of a “road not taken” situation, where I’d decided a course of action that canceled out the other scenario.

Now I’m glad I have that other scenario to fall back on, because since I wrote the first draft, I’ve flashed on connections for that Plan B in the next book that would’ve been interesting, and now I’ll get to explore those scenarios.

It turns out Plan B was the right one all along, and now, based on things I’ve learned and relationships that will develop, Plan B is now Plan A!

The Map is not the Territory

It’s strange how these things happen and an example of how the map is not the territory when it comes to writing and story-telling, plotting and character development.

It’s also an example of how being open to new possibilities for our stories leads to serendipitous discoveries.

If it’s true– and I believe it is– there is an energy in the collective unconscious.

That energy seeks expression through our work.

Those epiphanies, revelations, and accidental discoveries are the universe’s way of guiding us toward the truth that we as writers seek and want to share with readers.

Granted, having to reconfigure outlines, rewrite some scenes, and create new scenes from scratch certainly comes with challenges and frustrations.

But in the end, isn’t it worth it?

We wouldn’t cling to an itinerary that doesn’t really suit our needs nor desires, once we’re underway on the trip of a lifetime; we’d make adjustments.

We owe it to ourselves and our readers to craft a sturdy piece of writing that’ll last, not a flimsy piece that can’t withstand a close, diligent read.

So we’ll do the work.

Just another reason that writing is so hard, so rewarding, and so worth it!