Seasons of Change by Nevada McPherson 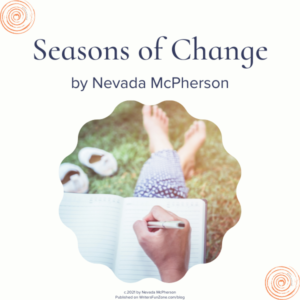 Let’s welcome back monthly columnist Nevada McPherson as she shares with us “Seasons of Change.” Enjoy!

I’ve been having a very topsy-turvy summer, and all the things I’d mentioned that I wanted to do in an earlier post haven’t gotten done yet; I admit it.

I think about projects and attempts left unfinished, and I wonder where all the time went, but then I remember things that had to come first, such as family health issues and being there for the people I love.

I’d expected everything to rock on as usual, but I’ve had to do a lot of adapting, and things don’t look like they’re getting back to the old normal any time soon.

Be Careful What You Wish For?

Last spring, and during the earlier part of the summer, I’d sit on the back porch and think of how I’m ready for change, for a new chapter and more excitement, ever mindful of that famous quote: “Be careful what you wish for; you just may get it.”

I realized at the time that it’s risky wishing for change, but I did it anyway.

I’ve been known to do that before: take on projects and activities that I knew would be exceedingly difficult, but if it was something I wanted to do, I’d plow forward, even as people told me things like “You know that’s going to be hard.”

Most things worth doing are hard on some level, so once again, I was ready to plow forward.

What Stories Can Teach Us About Change

I would also think about how in that old Alfred Hitchcock movie Shadow of a Doubt. The main character, Charlie, a young woman in her late teens, would talk about how dull things were in her little town of Santa Rosa, California, and how she wished for more excitement.

Excitement arrived in the form of her wayward uncle, a handsome and charming man, played by Joseph Cotten, who pretended to be a loving relative, but behind his laid-back demeanor hid a murderous streak.

Charlie, after getting caught up in his schemes, finds herself in danger when he realizes she has the power to expose him, then thinks back on her earlier desire for excitement, and all of a sudden, her uneventful life and little town seems infinitely more desirable than the terror that engulfs her.

I don’t want to spoil anything if you haven’t seen the film, but like a step on the hero’s journey I discussed in my last post, let’s just say there is a “return with the elixir” and that, after undergoing all her hardships, Charlie comes out the other side much wiser.

Dorothy in The Wizard of Oz is another character who laments her uneventful life on a Kansas farm and literally gets swept up in a storm that takes her into another world.

The outcome of her trials and challenges is that she gains a new appreciation for good friends and all the people she loves and who love her, and she returns with the realization that there’s “no place like home.”

Embrace the Seasons of Change

Some of the things that are happening now with the changes and challenges swirling around me, possibly you too, and even the whole world may have the potential to destroy us, but if we persevere, we can also come out on the other side much wiser and with a new appreciation for everything we hold dear.

The key to thriving through chaos is to stay as focused as possible on the things that bring us joy as we navigate the storm, to reach out for help when we need it, and to tap into our own resilience and resourcefulness in order to move forward.

One thing I’m mindful of is that change is never easy, and transformation can be a messy business, but like before, I’ll plow forward anyway. Those projects left unfinished will bring me joy as I complete them at a later date, enriched by experience that I will use in my writing.

When the time is right, I’ll return to them with renewed strength and a fresh perspective, and they’ll be all the better for it.

So will I, for that matter.