Bad Girl Archetype: We Love Her, We Hate Her, We Want to Be Her Welcome to the Wednesday series on Fans of Fantasy and Science Fiction.

I’ll just come right out and say it! {Scary, in a good way.} I’m releasing my YA fantasy at the end of this month! Henrietta the Dragon Slayer! (Update 2012: This book is now out!!)

Henrietta is a bit of a bad girl as the story opens. She’s gettin’ out of Dodge, leaving her hero days behind, not wanting to be the hero anymore, leaving behind her responsibilities for a life down in the sunny beaches down south. Her heart is hurting and she doesn’t even know it. Yet.

Where did the inspiration for Henrietta come from?

I devote this post to the bad girls I know and love, drawn mostly from movies.

Feel free to chime in with your favorites!

I have a primary place in my heart for Nikita in the original Luc Besson La Femme Nikita.

She’s bad out of choice and circumstance. Then she gets a chance at redemption. Or does she? I like how she has the opportunity to remake her life.

Another: Lara Croft in Tomb Raider.

Spoiled rich girl. Or is she? Not just. She lost her beloved father early and seems to be driven by some sort of justice. She’s strong, she’s capable, and she won’t stop until she gets what she wants.

And Lilu in The Fifth Element, another Luc Besson film.

She may not be considered a bad girl, because she’s supposed to save the world. But if the world is not worth saving she will let it be destroyed. That takes guts, and the strength of doing what’s right, in the face of the potential horrible loss.

The ultimate bad girl is Kali, the Hindi goddess of birth and destruction, and eternal energy.

I’m drawn to her, without consciously knowing why. Then I read this: “She is also revered as Bhavatarini (literally 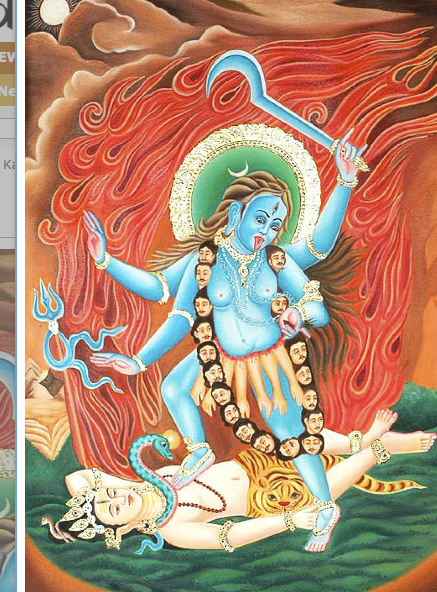 “redeemer of the universe”).” Oh! Redeemer!

I love stories where the Bad Girl gets redeemed. She’s on the outside looking in, her violent tendencies seemingly keeping her at odds with the expectations of what it means to be a woman. Only through acceptance of her benefits to the community that both she and the community agree to can she find her place in the community.

Lastly, I want to mention the book, Warrior Women: An Archaeologist’s Search for History’s Hidden Heroines by Jeannine Davis-Kimball, with Mona Behan. This from the editorial reviews at amazon says it all: “Nearly one-quarter of the women buried in some late Iron Age sites were either warriors or priestesses. Even the remainder, ‘hearth women,’ were important players in the tribes’ surprisingly egalitarian societies. Further, southern Kazakhstan’s famous ‘gold man’ was in fact, a ‘gold woman.’ Davis-Kimball also finds solid evidence of ‘high status’ women in graves as far east as China and as far west as Ireland.”

I know I come from a long line of warrior women, many of them viewed as Bad Girls from the culture of their day.

It’s time for us, for me, to reclaim our Badness and use it as a force for good!

Beth Barany writes young adult fantasy novels to empower girls and women to be the hero of their own lives. More at her author site here.