Inspired by a Photograph by Nevada McPherson 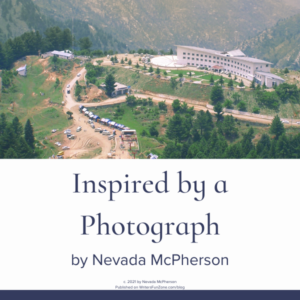 Let’s welcome back monthly columnist Nevada McPherson as she shares with us “Inspired by a Photograph.” Enjoy!

Even though it’s near the end of the year, there’s something about autumn that makes me feel like a fresh start and a new beginning. I want to wrap up any outstanding projects and start some new things.

Among the activities that I’m excited to get back to this fall, one is my return to blogging!

Taking Pictures Instead of Writing

It was Writer’s Fun Zone founder Beth Barany who suggested I start blogging a few years ago, and when I was resistant, she said it didn’t always have to be a written blog but that I might consider featuring pictures instead.

Since I was creating graphic novels at the time, that helped me to get started and as I waded into other forms of nonfiction writing more and more, a bit at a time. I came to enjoy working on the short pieces about matters that interested me.

I am coming back to that now, ready to tackle wide-ranging subjects that I’ve always wanted to write about regarding everything from pop culture to my favorite cinematic and literary interests.

Sometimes a drawing or photograph inspires a single blog post, or it inspires a whole series of posts, such as the one I’m now doing now on motels.

How I Was Inspired by a Photograph

I took a selfie one night while staying at a motel and decided to do a series of Jack Kerouac-style word sketches and poems to go along with other photographs of motels.

These were places where I had stayed in the past, I was staying in the present, or any others that I’d come across in my travels.

Some are quite charming, with a retro appeal, others are not especially charming but provide a place to sleep, if not much else.

Still, the transience of such places, combined with time spent on the road or in the midst of some sort of adventure, planned or unplanned, inspires me in different ways—so that became a series!