Going Pro: The Journey Using a Blog to Make a Bestseller by Marilyn Flower 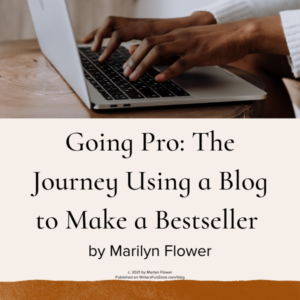 Let’s welcome back Marilyn Flower as she shares with us “Going Pro: The Journey Using a Blog to Make a Bestseller.” Enjoy!

Writers, how do you explore and develop your characters?

When I first started writing fiction, I would interview them on paper.

I would ask them juicy questions, like what really pisses you off? Then I’d inhabit their psyches as best as I could and answer.

Once I got the feel for the cadence and tenor of their voice, they wouldn’t shut up. They loved to rant, rave, pontificate, and reveal their deepest darkest secrets.

In the process of revising my comedic novel in progress, I wrote a few point-counterpoint blog posts for my Medium publication Humor! Authenticity! Magic! in that style.

For example, my main character, Pastor Sterling, believes in answering teenagers’ sex questions. His abstinence-promoting wife, Wendy, does not.

So when Ninja Writers founder, Shaunta Grimes, announced the BYOB (Blog Your Own Book) Challenge last June, I was primed!

Her idea was to post daily on Medium, with an eye towards creating an ebook from the results. By the way, they’re running the challenge again right now.

I wasn’t sure about a book at that point. I just relished writing posts as my main characters. Since the story takes place in a church community, I planned rotating blogs as “Jesus the Lamb” church’s website.

Each week, these characters would tackle different issues affecting them and their community. Issues in the novel itself, such as abortion, teen sex, and the right to die.

Using a Blog to Learn

Every Saturday, I did a post about my process: what I was learning, the nuggets mined, and how I’d use them in my revisions. These ended up being about character voice, subtext, soapboxes, and emotional triangles. Such fun!

But a book? I was thinking along the lines of a PDF I could use as an opt-in for my email list.

I did not. So I carpe diem-ed just in time to have calls to action linked to a landing page of my freebie opt-in on every one of these August posts.

Because if folks enjoyed reading them half as much as I enjoyed writing them, they’d want to know when the novel, Man Pregnant!, comes out, right?

Around that time, Shaunt launched the Ninja Writers Press with her vision for a series of writer’s guides on topics like grammar, punctuation, genre, and character development.

My query was accepted, as well as my subsequent proposal. I got to learn SEO, market research, and how to create an outline and sample chapter.

Once my proposal was accepted, I was assigned a project manager from the Ninja team. She helped me get over technical hurdles, like keywords and Amazon categories. Phew!

We assembled Creative Blogging: Ninja Writers Guide to Character Development with chapters on subtext and emotional triangles. Basic explanations introduce relevant character blogs illustrating the themes. My annotations highlight the gems unearthed and their use in my novel.

Letting Go of My Baby

Selling the book means I’m the author, not the publisher. That would be Ninja Writers Press.

While I was free to offer input, some decisions were out of my hands. The title and cover were designed with the entire series in mind, as well as SEO data. Selling a book to a publisher involves a bit of surrender in the process.

I chose to be someone easy to work with, recognizing where I was the expert (my content) and where I was not (SEO and publishing). This paid off well, not just in earnings, but in terms of the writing professional I’m becoming.

My ebook launched on August first.

Exactly a year from the first blog post of the challenge.

Thanks to Shaunta’s huge email list, word got out. We publicized it through various classes, workshops, and writers clubs. Much to my surprise and delight, we sold 96 copies the first day.

It’s been a whirlwind week of marketing, promoting, and launching my street team.

Once I catch my breath, it’s back to editing Man Pregnant! and publishing my next ebook, Bucket Listers, Get Your Brave On: How to do the Thing You’re Too Old and Scared to Do.

Marilyn Flower writes fast fun reads with a touch of magical realism to strength the imagination of socially conscious folks. Clowning and improvisation strengthen her during these crazy times. She’s a regular columnist on Medium.com and for the prison newsletter, Freedom Anywhere. Five of her short plays have been produced in San Francisco.