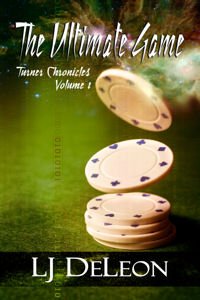 The Ultimate Game by LJ DeLeon

Please welcome guest columnist LJ DeLeon, a fantasy romance indie author sharing a bit about her writing process. I find how she develops characters quite useful! I’ll use some of her tips for my next novel.

In my last blog, I covered examples of in a character’s life as he grows up that make him who he is.

Today I’d like to talk about not only his character but how the world he grew up in helps him survive the world he awakens in. This encompasses last week’s blog but also the actual world s/he grew up in. For this, I’m using my hero, Max Turner, from The Ultimate Game.

Max was born in 1845. His father’s a professional gambler. When caught cheating, his dad is gunned down. In that moment, six-year-old Max’s life changes direction. His mother becomes a prostitute, he’s raised in a whorehouse, and he’s filled with guilt that he couldn’t save either of his parents, especially his adored mother.

So, what does Max do?

But The Ultimate Game doesn’t take place in the past. It’s a futuristic cyberpunk romance. In 1875, Max and two women are trapped in a cave. In 2484, he awakens in a cryo chamber. His fiancée is dead; her maid is alive. The world is tightly controlled by ten families/corporations. Independent spirits are discouraged and/or limited. The dead fiancée’s a direct descendant of the Riley Family, who wants Max dead.

Could a conman and gambler survive in this new world? Could he win and in so doing bring down the Riley Family? Could he become the head of a Family? What skills does he have that would have been lost in the cyber age? It’s a time when everyone except the leaders of the Families are implanted with GPS type chips that have explosives in them. How does he keep himself and Maddie from being chipped?

These questions center around the character of Max, Maddy, and the world the find themselves in. To write this story, it was critical to view the world itself as a character for it shaped the people in it.

The Ultimate Game uses these questions and Max’s past as the springboard for the story. Of course, Maddie isn’t all she seems either. Maid? I think not, try a thief who’s furious at Max for stealing or is it winning, the Riley fortune in a poker game before she cleaned out their safe.

So, what is Maddie’s character?

Before word one is written, I have my external and internal conflict. It’s all about character, the gut deep kind that determines our actions. These two people can join forces and survive or stay at odds and die.

Let’s see how I handled it when Max finally discovers the truth.

Pulling back, he brushed auburn strands of spun golden fire off her face and gazed into eyes filled with calculation. Ah, not such an innocent. “What are you?”

“Maddie,” he drawled, grinning at the fleeting look of shock replaced by cunning. “We both know you’re so much more. Like recognizes like.” Bending down, he pressed a kiss to her forehead and tucked the blanket around her. “Trust me, Maddie. Trust me. We’ll make a great team.”

Blurb for The Ultimate Game:  A con game from the past and a gamble on love in the future hold the key for world order in a cybernetic age.

Trapped in a cave-in with two women in 1875, Max Turner awakens to a sterile cryo lab in 2484. If he thought he could play it straight, he has another thing coming. Only the heads of the few ruling families stay un-cyber-chipped and alive. His one chance of success rests in passing-off his cave-in partner, Maddy Doyle, as his dead fiancée, Madeline Riley, ancestor to the privileged Riley Family—the same family that blew the mine.

Assisted by a renegade scientist, a rebellious cyborg, and his newfound wife, Max lays out his plans. His greatest asset is Maddie, a beauty with a calculating mind to match his own and startling new cybernetic skills. Can the lovers process their con game fast enough to survive the Riley Family’s attempts on their lives?

About the Author
LJ DeLeon is an Army brat and a world-traveled former CIA Intelligence Analyst who has seen enough of this world to appreciate other worlds. Working for the CIA was great training for writing fantasy, paranormal, and futuristic romance — and understanding the warrior mentality. Amazing how real life and fiction overlap.