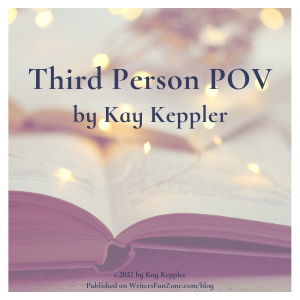 Let’s welcome back monthly columnist, editor, and novelist, Kay Keppler, as she shares with us “Third Person POV.” Enjoy!

Most of the books you read today are written in the first-person or third-person point of view.

These are style choices that authors make to help readers identify with—or distance themselves from—their characters.

The POV you use helps to shape the narrative and frame the story for maximum impact.

Choosing which point of use to employ—and being consistent with it—are challenging.

When you read “Last night I dreamt I went to Manderley again,” Daphne du Maurier puts you directly in her character’s head.

Rebecca is a spellbinding story, still powerful today, eighty-two years after it was published. However, that “I” is the only character whose dreams and fears you’ll come to know intimately.

You’ll never learn what another character is thinking or feeling—except through her eyes, in her interpretation of events.

And if readers don’t like the character who’s telling the story, if they aren’t sympathetic to her plight, they’ll stop reading.

No author wants that.

Authors who choose to tell their stories in third person often do so precisely so they can present a range of characters more fully. But the third person point of view is trickier to maintain because you have to navigate its facets: third-person omniscient, third-person limited, and deep third-person.

This style puts you, the writer, as the all-seeing, all-knowing storyteller.

You navigate space and time, telling the reader everything s/he wants to know about everyone in the book, sometimes in the same paragraph.

In this mode, you stick to one character.

You can reveal all that’s in your character’s head, but no one else’s.

Because you’re an external observer, you know more than s/he does and can offer commentary on your character.

This POV style limits you to a single person at a time in which you “are” the character: you think and feel and know what your character thinks and feels and knows.

However, you can include the POVs of other characters in your story, as long as these are developed in separate scenes or chapters.

Using your chosen POV style consistently adds clarity in your work and helps readers engage with your story. However, each style has some pitfalls you want to avoid.

When the narrator can shift from one character’s perspective to the next, revealing everything, you risk giving readers too much, too often.

It’s like readership channel surfing—readers can’t figure out where they should settle.

Because you’re an observer using the POV of a single character, the only way you can convey any other character’s inner life is by having your POV character interpret someone else’s behavior and thoughts based on what s/he sees.

As the narrator, you can observe something the character misses, like the phone off the hook, or the way someone watches when your character isn’t looking.

(In omniscient POV, you can reveal everything, including, for example, what the watching character is thinking and feeling.)

You the narrator are, essentially, the point-of-view character.

You experience events as though you were using first-person POV, but with third-person pronouns.

When you change scenes, you shift to another character’s POV and experience everything through that character’s lens.

The error that most writers make is head hopping—and we’ve all done it—is not holding onto one character’s POV through an entire scene.

Adding another character’s reaction or thought is almost an unconscious move.

Make sure that your POV character doesn’t know what another character is thinking or feeling. S/he can infer it, but that’s as far as it can go.

Moreover, in deep third, you are your character. If s/he doesn’t know something, you don’t either.

But if you’re writing in limited third, you, as narrator and observer, can notice that there’s blood on that off-the-hook phone or offer an emotional commentary that your character might not see or realize that s/he’s feeling.

You can move in and out of that character’s actual experience.

If you use the omniscient point of view, in which you reveal all about everyone, you probably need to tell the reader what the character is feeling with descriptors such as “she thought” or “he felt.”

However, if you use limited and deep-third POV, you won’t need these, because you’re in a single character’s POV and every thought or sensation is theirs alone.

Consistently executing the point of view you want is difficult for all writers.

Having an outside reader or editor can help point out shifts that might confuse readers. But sometimes writers use these shifts to great effect or with no loss of clarity.

Nora Roberts, Toni Morrison, and Kevin Kwan, among many others, have broken the “rules” of POV with great success.

In the end, all that really matters is that the story works. 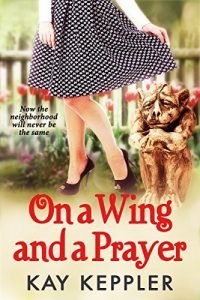