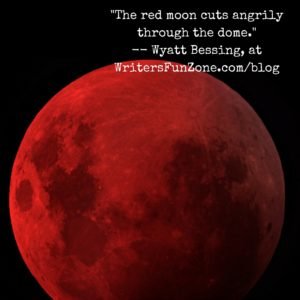 The red moon cuts angrily through the dome.- — Wyatt Bessing, at WritersFunZone.com/blog

Welcome back to our monthly columnist, Wyatt G. Bessing. A writing coach, teacher and author, as he shares with us “Playing with Personification.” Enjoy! I really enjoy this month’s game. I hope you will too!

Whenever I read a particularly good book, I find myself enwrapped in its world and its telling. I want to examine it closely, stop for awhile to see what it is that captivated me. How has this writer woven her magic spell?

After all, I want to capture some of that magic in my own writing. 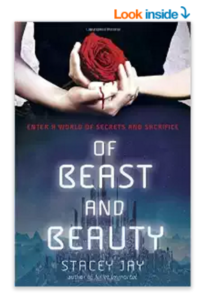 Of Beast and Beauty by Stacey Jay

Most recently, I’ve been enthralled by Stacey Jay’s young adult fantasy Of Beast and Beauty. From the opening pages, it’s full of tension and mystery as we learn of a cursed city and the conflict between the Monstrous people and the Smooth Skins. One of the most effective ways Jay brings this world to life is through personification, making inanimate objects come alive through analogy to human traits and actions. Flowers cling to their stalks, the red moon cuts angrily through the dome, the air is hungry, and flames lick at the princess’s nightgown.

One thing I love about studying a text for examples is how closely it makes me read, how it makes me pay attention to every nuance of the language, every phrase. Writers listen closely to how words sound, the cadence and rhythm of each sentence.

Look for patterns. In the examples I mentioned above, there is certainly a pattern to the personification – nearly all the inanimate objects of the princess’s world are personified as destructive beings attempting to devour her or the places she loves.

Keep this in mind: A beautiful image that works well in one story may not serve the tone or theme of another. An image of the night swallowing a girl works well in a fantasy about corruption and monsters, but may not be as appropriate for a romance or adventure story. So you may need to adapt your list to fit the book or story you’re writing. Each object you personify should build or relax the story’s conflict in some way. An “angry wind” is easier to imagine as an antagonist than, for example, a wind that’s simply “strong.” A “smiling moon” offers solace to a troubled man in a way a “bright moon” doesn’t quite convey. As with any detail in fiction, don’t include personification simply for its beauty or uniqueness; it must have a function in the plot.

Each object you personify should build or relax the story’s conflict in some way.

For this month’s game, first answer this question: What’s the central conflict of your book or story?

You ought to be able to state this in one sentence.

Here’s mine: A young physical therapist experiences a resurgence of the frightening synesthesia he had as a child and must go on a quest to find his strange brother to help him overcome it.

What are some actions that fit your theme?

For my novel, obviously there’s an overarching chase and search theme, but there are also elements of watchfulness and overwhelming sensation.

Brainstorm six actions that symbolize the themes of your novel.

Then brainstorm and number six objects your protagonist may encounter during the course of your story.

My lists are below. Feel free to use them or, better yet, create your own.

Now roll on each table with a six-sided die.

My first combination is 2 and a 5 – search and stone.

He stumbles out into the night, following his brother toward the waterfall. The lonely riverbank, lost in the darkness near him, searches him out, its sharp stone fingers prodding his feet.

Next I roll a 5 and a 1 – the orthopedic brace implores.

As he pulls the brace off the girl’s leg, its shimmering plastic mouth smiles broadly, imploring Ryan to look more closely at her atrophied calf and let the synesthesia invade him so he can feel deeply again.

In my next revision I’ll bring these moments of personification into my novel, deepening the reader’s connection to my protagonist and his conflicts.

By describing its objects in human ways, I’ve helped my reader identify with my imaginary world.

Play with making allies and antagonists out of the ordinary things and environments of your story, and your reader will want to stay within that living, breathing world. 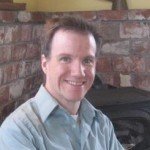 Wyatt Bessing is a writer, writing coach, and learning specialist. His stories and essays have appeared in Bedtime-Story.com, Outsider Ink, national educational assessment materials, and in the anthology Dance, Human Rights, and Social Justice. Through his workshops, website, and blog at wyattgbessing.com, he guides new and experienced writers in crafting more effective, expressive, and striking work. During the day, he works at Star Academy in San Rafael, teaching reading and comprehension skills to students with learning differences in elementary through high school. He lives in Santa Rosa, CA with his wonderful fiancee and co-creator, Sarah Laugtug.