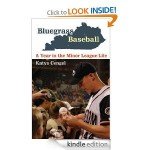 Today we welcome back our guest columnist, Katya Cengel. Katya discusses with us her non-fiction writing tips. Enjoy!

As a journalist, I thought writing a book would be easy. After all, countless others with less writing experience have penned titles. I’m not a president’s daughter, like Jenna Bush, who bagged a deal with HarperCollins for a rumored $300,000. But I am a paid writer who has written thousands of articles over the years for newspapers and magazines. I know how to deal with deadlines, editors and research. A book seemed like an easy enough undertaking.

Then I started writing. It had been grilled into me as a journalist to keep my sentences tight, cutting any unnecessary words. As an author I needed to write around 70,000 words. And yet I still found myself tightening my chapters: cutting scenes I thought too lengthy, deleting descriptions and otherwise fine tuning. I had always hated having to tell a story I thought needed two pages in 600 words and thought writing as long as I wanted would be freeing. But now I struggled to turn stories I wanted to wrap up in 2,000 words into entire chapters. My editor had warned me about this, but I hadn’t realized how hard it would be to retrain myself. I was used to getting to the point quickly, not sustaining tension over a number of pages.

Length presented a different sort of problem when it came to editing. I like to read my work aloud in one sitting. Reading a 372 page book in a single sitting is difficult, especially when you have gone over every word so many times you know the text by heart. But reading it over several days would have made it hard to notice if I had repeated information.

While my journalism experience hadn’t prepared me for the magnitude of the task, it helped in other ways. Here are a few of my top non-fiction writing tips:

I will be teaching non-fiction writing at the Central Coast Writers’ Conference in September http://www.communityprograms.net/wc/wcindex.htm.

Katya Cengel has written about everything from retired dancing bears in Bulgaria to the world’s largest machine gun shoot in Kentucky. She spent half a decade reporting from the former Soviet Union for English language newspapers and the San Francisco Chronicle, Wall Street Journal, and Marie Claire. She has reported from Africa, India, Europe, the Middle East and Haiti, and spent eight years as a writer at the Louisville Courier-Journal. Katya didn’t have to travel far for her latest story for National Geographic. More at her site: www.katyacengel.com. On Facebook: Katya Cengel. On Twitter @kcengel.