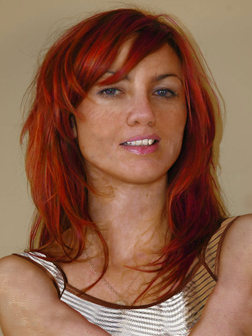 Welcome to the weekly Indie Fantasy Author Spotlight. Today we feature American Gothic author, Vanessa Cavendish, author of the work-in-progress, Earthworm Soup. Vanessa, thanks for agreeing to be a featured Author for my Fantasy Indie Author Monday series.

Sure! A bit about me: I write American Gothic. I could say Country Horror or Rural Fantasy or Farm Punk, but I like that “American Gothic” comes pre-loaded with the image of that couple with the pitchfork that everyone knows is brother and sister but is too polite to come right out and speculate on just what the heck is going on out there in the wilds of Indiana or Iowa or wherever that is. Also, it sounds less like something I made up. I can point to my American Gothic antecedents. Children of the Corn or Frailty or Cape Fear. Because, look here. If you say Flannery O’Connor and Joyce Carol Oates, you risk sounding like a poor relation putting on airs.

Beth: What got you into writing your current work-in-progress book in the first place?
Vanessa: I call Earthworm Soup my anti-biography, since it grew out of imagination, memory and night-terrors. Jeannie Iverson’s imaginary nemesis comes to life and takes the name Eugene, but she calls him Sewer Boy. Eugene is everything she’ll never be. He takes possession of anything she denies — friends, family, reputation, self-esteem. Linked by mutual repulsion, they feed on one another. Her negativity energizes his charisma; against her will and better judgment, she fuels her darkness on his brilliance. When he threatens the last good thing remaining to her — a childlike admiration for Jarrod Frye — unless she interferes, Eugene will sacrifice Jarrod and free her of her dependence on himself. Jeannie must embrace depravity or else betray the only innocent love she’s ever imagined.

Beth: What was the most fun thing to do during the writing, producing or marketing of your book?
Vanessa: I like telling lies. Who said that truth is beauty, beauty truth? Two things I like: taking what’s “ugly” and making it beautiful, and showing the truth in a patent fiction. When Jeannie says of Eugene, “He sucks the life out of me!” we might read it as a metaphor, but she means it literally. Fiction bestows double-vision on an astute reader, like 3-D glasses. Done badly, it’s a Cracker Jack toy. Done right, it changes the look and feel of the world, makes it richer, more vibrant and meaningful. Not every writer cares about that aspect of fiction, or needs to, (maybe they’re better socialized than I am), but I try — by clumsy and deliberate efforts — to get at the shy thing that stands behind us, silently witnessing.

Beth: What inspires you about writing fantasy?
Vanessa: I love fantasy that’s secretly embedded in the world the reader inhabits when she puts out the lights. You don’t have to go through a wardrobe to get to my neck of the woods, but it won’t show up on Google Earth, either. That’s partly for my own privacy, since I include my whereabouts in my fiction. There ain’t no Keening, Oklahoma, even though you might have passed through on I-35.

Beth: Why are you deciding to Indie publish?
Vanessa: Because I can do math. I see no sense in a writer making 87 cents from a book that earns 5 to 7 dollars as an e-book and 17 to 24 in paper form. People don’t seem to understand that the verb “to publish” doesn’t mean just “to print” but also “to promulgate” or “to market.” Publishers have abdicated the role that made them viable as middlemen. We all think we’re that special one that’s going to hit the big time, but that has less to do with ability than with happenstance. It happens to one good writer in a million and to one so-so writer in a million. The writer who sells her rights to a company that does nothing to market her book still has to “self-publish” if she wants to succeed. As the de facto publisher, she deserves the lion’s share of the profits. Period. What publishers earn, based on their contributions to most fictional projects, is a fee for editorial services.

Beth: Anything else you’d like to share?!
Vanessa: I’m sharing Earthworm Soup on my blog, http://vanessacavendish.wordpress.com. If you start with the oldest post in the category, by the time it’s finished, you’ll have the whole thing in something like its final form. I’ll take it down before I “publish” it, but for now it’s free. Why? Because I love you. Oh, and one other plug: I also love that I get to guest-blog at http://welcometotheasylum.net