On the Hero’s Journey by Nevada McPherson 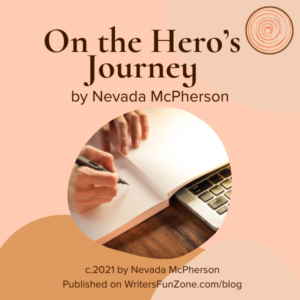 Let’s welcome back monthly columnist Nevada McPherson as she shares with us “On the Hero’s Journey.” Enjoy!

I’m a fan of the hero’s journey story structure, as are many, I suppose, going back thousands of years.

The hero’s journey, as you are likely aware, is a structure followed by storytellers before even Beowulf and is still championed to this day, from George Lucas’s Star Wars to Pixar’s Toy Story.

Drawing on the collective unconscious, and discussed in writings by psychologist Carl Jung and Joseph Campbell’s The Hero with a Thousand Faces, the hero’s journey takes a mythic approach to storytelling.

Within, a hero leaves their “ordinary world,” then follows several basic steps, overcoming obstacles to achieve a goal, and in the final step, they “return with the elixir,” representing the prize sought on the journey. Usually this is something that will contribute to the greater good.

What’s So Great about the Hero’s Journey?

When I was first learning the basics of screenwriting, one of the hardest elements I found to fully grasp was structure.

I was looking for something beyond the basic three-acts, to break them into smaller steps so that I could stay on track through a roughly 120-page feature script. I wanted something to help me through that daunting desert of a second act and to provide signposts so that I would know I was headed in the right direction and not just spinning my wheels in the sand.

I first learned about the hero’s journey in the first edition of The Writer’s Journey by Christopher Vogler, which provides examples of how that structure cuts across space, time, and genre, and it helped me immensely in my writing.

I also teach it in my film studies, writing, and literature classes, because even though structure works on an unconscious level, I believe that an understanding of it increases one’s deeper appreciation of a work on a critical level.

Students are often intuitively aware of these steps and are then able to recognize them consciously in artistic works and in aspects of their own lives.

Everyone is the protagonist or main character of their own life story.

In the realm of the personal narrative—a winding, twisting, often confusing progression toward maturity, understanding, and (hopefully) enlightenment—it helps to have signposts to get us through that Sahara of a second act.

In my own writing journey, as well as my life, I’ve left my comfort zone (ordinary world) and long ago accepted my “call to adventure”: the burning need to tell stories.

I’ve met with “the mentors,” crossed “the first threshold,” been through tests, and encountered “enemies” and allies. I’ve approached the “inmost cave,” been through a “supreme ordeal,” and faced some of the other steps, too.

One can go through all these steps on any adventure, through any challenge or journey encountered in life, on a macro or micro level.

As for writing, I’ve just signed with a publisher for my new novel, which is just one step, and working with an editor to get to the finished product will be yet another!

I’m looking forward to progressing further down the road. In one way, getting to the point of having a book published is a return with the elixir, a dream come true for me. In another way, I know that it’s just the beginning: the start of a new journey.

The Hero’s Journey in Your Own Life

Where are you in your writing or life journey? Join me this summer in taking time to consider how far you’ve come and your intentions and next steps going forward.

No matter how chaotic things seem sometimes, looking at the circular map of the hero’s journey helps one to realize that each step forward brings one closer to the return with the elixir, which means the hero is then ready to undergo the next adventure, to take on new challenges, and to begin a brand-new journey.

Listen out for your next exciting call to adventure. The road awaits!