You Have to Write It to Find Out by Nevada McPherson 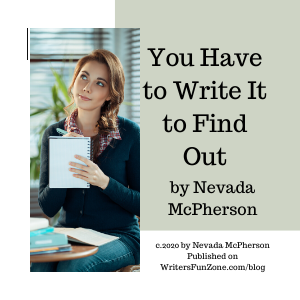 Let’s welcome back monthly columnist Nevada McPherson as she shares with us “You Have to Write It to Find Out.” Enjoy!

This is a transformational time for many, and things that we used to take for granted, or their absence (toilet paper, for example, and going to meet friends at the coffee shop) now carry more importance in our daily lives.

We are learning to appreciate the little things on a deeper level now that we are in the midst of our world being transformed in ways we can’t even know yet.

As for writing, I’ve been working on the last few chapters of my novel. I basically know what happens but constructing the scenes and filling in the details is challenging.

Write It: The dark night of the soul

The part I’ll be working on soon is the “dark night of the soul” for my characters, and the territory in this section is less familiar to me than some of the other parts.

Even though I do have an outline, I’ve been writing scenes out of sequence as the mood strikes me. I don’t normally write a narrative out of sequence but that’s what has kept me moving forward on this project.

The other day I was working on a scene just to see where it went.

Write It: I couldn’t get it out of my mind

The first part wouldn’t get out of my mind, and usually when I write something down it makes room for me to focus on the next thing. I didn’t even know if I would keep this scene or just put it away somewhere and forget about it.

As it turned out, what I thought would be a barely consequential, bordering-on-self-indulgent scene that would really have no business here when it was all said and done, turned out to be key in setting off events that lead to pivotal moments in the rest of the story.

I knew I’d have the later scenes, but the scene I wrote just to write it and move on turned out to be the thing that would spin the action in the right direction. It turned out to be the gateway to the third and final part, and the actions the characters take during that scene and as a result of it, change everything. It leads directly to where love and loyalty are tested, and where trust is everything.

Write It: That Nearly Throw-away scene

How did all that come about from a nearly-throw-away scene? It may very well be that a scene has no place in a work, and that you write it and move on, editing it out of the final version, if it even makes it that far.

On the other hand, it may be a portal to the right ending.

Just like you’ll never know if you could have done it if you don’t try to do something difficult, you may not find the right door if you don’t attempt to build it. It’s always worth the effort. And from there, things that you were struggling with just might start to click into place.

Let’s appreciate the little things: the little scenes, the little pleasures and the little acts of kindness and compassion to get through this time of big uncertainty—one day at a time.