Commitment to What Matters: Your Message 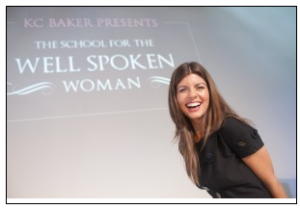 A few years ago, my friend KC Baker was a struggling, broke investment banking dropout, with a dream of somehow, in some way, contributing greatly to this world.

However, every time she got inspired and took action to make her business & creative dreams come true, she would eventually back off.

Self-doubt took over and she would question whether her ideas were valuable to other people. She feared people would not want what she had to offer or resonate with what she had to say. Subconsciously, she prevented herself from feeling the pain of this potential failure and rejection by not putting her work out into the world. She would not speak up. She held back.

And she suffered. And she continued to be broke and stressed out.

She would pray for guidance, and would hope and wish and dream. And then, she’d get inspired again. She’d start to get in action. Life seemed wonderful and full of possibility. She felt guided and clear.

But once again, self-doubt and fear would enter her mind, and she’d back off from her vision.

This pattern repeated again and again for years.

Eventually, she met a man and fell in love. He loved her so deeply and believed in the beauty of her visions. Because of this true love, he was able to see the sea of misery she was swimming in and point out this debilitating pattern to her.

By this time, she had come to believe, beyond a shadow of a doubt, that the highest leverage thing she could do to support positive transformation in our world is to support women in unleashing the brilliance of their voices.

She had begun speaking publicly in her community, and women were coming to her to find their own freedom to speak up and to receive her help in writing epic talks. KC had never known happiness like this. The level of joy, fulfillment and natural ease she felt in doing this was unlike anything she had ever known. And yet she felt held back in really going for it — in supporting women in the way and magnitude she felt called.

And so, when her man suggested she make a true commitment to this work, and end the pattern of being held back by self-doubt and fear, she was ready. She was clear: Yes, this is the work I am meant to do. This is the message I am meant to share.

One afternoon, overlooking the San Francisco Bay, KC & her man held a commitment ceremony for her mission. She committed to supporting women in getting their messages out into the world, full out, for the next 12 months of her life: no matter what. No matter the fear that might arise. No matter the self-doubt that might creep in.

Soon, she was receiving many speaking opportunities to share about her work and her philosophy behind it. Soon, word spread of her work supporting women in getting totally clear on their messages and finding the freedom to stand up and share them.

She was asked to speak at two TEDx events. TED, TEDx & American Heart Association speakers hired her to help them prepare their talks and deliver them with authentic confidence & grace.

She traveled to the Middle East to support women from all around the region in finding the freedom to speak up.

Her own School for The Well Spoken Woman LIVE events in SF & NYC sold out as women flocked to come hear the graduates’ extraordinary talks.

Why?  Commitment had set her free.

I share this story with you today because I want you to be completely free from any shackles of fear & self doubt. I want you to have total freedom to share your work & what you have to say with this world on far reaching levels.

This world needs you and your wisdom.

I also want to introduce you to this amazing woman, KC Baker, who has devoted her life work to supporting the rise of women’s thought leadership.

Since her own commitment ceremony a few years ago, KC has seen that making a true COMMITMENT is the number one most powerful thing women can do to set their mission on fire and have their ideas spread.

Fear & doubt will naturally arise, but the question is: What is in the driver’s seat of your life and your work in the world? Is it fear & self doubt? Or is it your commitment?

KC has created a free video series called “The 5 Keys to Women’s Thought Leadership”, and the second video in the series on Commitment just dropped. Check it out here! — > Video Training

When you make this kind of commitment, your message can’t help but fly.

You’ll also learn in her free video series how you can get completely clear on what the message is that you stand for, and how you can become known for your ideas & build your tribe.

Her teachings are unorthodox and highly effective, and I cannot recommend enough that you check this out. Her work has radically influenced my own life as well as countless other women thought leaders.

PS- With unclear messages and lots of holding back, it’s near impossible to grow our work in the world to the degree we want. Get clear. Get free. And be known for your message…KC can help you and can make it a lovely adventure