Getting Playful with Playlists by Nevada McPherson 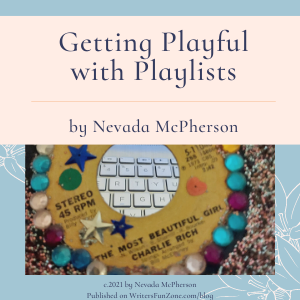 Let’s welcome back monthly columnist Nevada McPherson as she shares with us “Getting Playful with Playlists.” Enjoy!

I joined Spotify last summer, which opened up new possibilities in my music selections for walking and exercise, and it turned out, for completing my novel as well.

I can hardly listen to most music without relating it to something I’m working on. And now I’m able to create playlists for my projects.

I have one for the novel, and for the upcoming sequel. I’m thinking of songs that inspire me for part three.

MUSIC AND MY CHARACTERS

I’d already been making loose associations between music and my characters. Lately they’re taking more concrete form with my playlists.

I’m incorporating this into my marketing strategy and creating visuals of the characters and including their music on my Instagram stories.

It’s fun for me and a way to connect with the mood and vibe in a way that others can tap into as well. It’s also a way to add multimedia to my posts.

The music I select spans genres and time periods. I have very eclectic musical taste, and my playlists reflect that as well as the moods and vibes expressed by my story and genre.

I have everything from 80s pop to 90s grit, and Russian pop to Western swing. It isn’t that specific music is mentioned all that often in my story, if at all, but it’s the spirit of the music that goes along with the spirit of the scene, character, setting, or mood.

Usually, I hear a song and think of which character it would go with, or a scene for which it could be the score. It wasn’t until recent months that I realized novel playlists are a thing, so you might consider creating one if you haven’t already.

Depending on your musical platform of choice, you can add songs to or delete them from your playlists as the mood strikes, and move them to other playlists.

For me it’s a way to stir my imagination as I’m out for a walk, a chance to focus on mood, tone and style.

I think of how music functions in some of my favorite movies and TV shows for inspiration as well. Whether it’s a part of a show or film, a theme song or tune, or the song played over the credits at the end, it makes an impression, and that’s to me what the creation of a playlist can do.

A novel playlist is a repository of sound impressions around a particular character, scene, or image, which enriches my ability to convey these things when I sit down to write. Anything that helps with that I welcome with open arms!

To get a sense of how this can work for you, a way to start might be to pay particular attention to songs in your favorite movies and TV shows.

Notice songs that speak to you on more than one level (which I’m sure many do). Notice songs that you hear on the radio or run across anywhere that cause you to think of your story or something in it or about it. What made you connect with it?

Eventually I’ll share my whole playlist for the novel on my IG stories, but for now I plan on continuing to post my character graphics (representatives of my characters in silhouette) along with a few seconds of a song.

It’s almost summertime again, so play and have fun with your playlists and let me know what you think!

Happy summer to you, and happy writing!