The Next Creative Project: Mind the Gap by Nevada McPherson 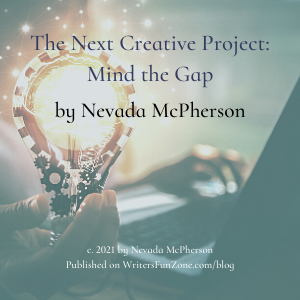 Let’s welcome back monthly columnist Nevada McPherson as she shares with us “The Next Creative Project: Mind the Gap.” Enjoy!

As spring arrives, I’ve been putting the finishing touches on the novel I’ve been working on steadily for nearly two years now.

If you’re a regular here, you may have seen some of my posts about the journey.

While I’ve been working on the novel for that amount of time, the original project is more like twenty years in the making because it’s based on a screenplay I wrote back in 2000.

It turns out that was only a fraction of the story. Once I was finished with the original version of the novel, it was so long I decided to divide it in half and turn it into a series of novels.

Now that the first book in the series is coming to a close (the writing and editing, that is), I find myself between major projects, with some time to turn to other projects I’ve been meaning to get to.

I have the feeling I used to have in school when I’d been in a play, with nightly play practice and learning my lines taking up the better part of my time.

Once the play was over and those blocks of time were no longer filled with play practice, I felt somewhat adrift, without the focal point of the upcoming performance to occupy my mind and every waking moment.

What would I do in those gaps of time?

How would my “free time” now best be put to use?

These are questions I’m now considering again, all these years later.

I have some ideas, so here they are:

1. Write some pieces of flash fiction.

This is something I’ve been wanting to do, but it seems like I’m forever in the midst of a long, time consuming project.

Not that there’s anything wrong with that at all! I love working on big projects, and I’m still learning as I go.

I’ve noticed that other writers I follow sometimes mention on posts that they’re taking a break from something longer to create a piece of flash. I’m inspired to do the same from time to time.

It might give me some perspective so that I come back to the longer project refreshed and ready to tackle it anew.

Some recent pieces of flash I’ve read are still stuck in my mind, so I’m inspired by the work of fellow writers. I’m on the look-out for subjects for some flash pieces of my own to submit to the growing number of publications looking for really short pieces that pack a punch!

2. Write the creative nonfiction I’ve been mulling over for so long.

I’ve had an idea for a long time about a piece of nonfiction I want to write. Want to write? Why not write it now?

Whether I’m in the midst of another project or not, I’m committing to making the time to go ahead and brainstorm and organize my ideas for essays and nonfiction and get writing already!

Some of these ideas may become flash pieces as well, and some may be lengthier, but I won’t know until I get going on them.

I did start writing one the other day. In retrospect I realize that I was giving too much history on the topic rather than getting to the heart of the matter of what I want to say. It took the actual writing to realize that, so there’s no better way to get closer to getting it done than just diving right in.

Don’t get me started on this.

By that I mean I can’t believe how long it’s taken for me to get started on this!

I’ve talked about developing online courses about film and film genres for what seems like forever.

I did start on it once, but that was long ago. Now it’s time to finish that mini-course, launch it, and get started on another.

I’ve tried to do this before and have even talked about it here in this very space, but lately I’ve committed more fully to planning my posts, written and visual, and coordinating those with my social media activity.

I’m now fired up to do this consistently more than ever, and I’m very excited about my current project and others I have planned, so this is now a definite go!

5. Engage with my growing online community.

As I said before, I’m inspired by the work of my fellow writers and have been enjoying their posts, tips, and links to their recently published work on social media.

I also like it when they share the challenges they’re facing in their writing and their lives as writers, as well as how they’re dealing with them.

It’s been quite a while since I’ve felt as much a part of a supportive writing community, and I’m encouraged to see writers supporting other writers and sharing.

Many of us are introverts, as I’m sure you well know.

I myself often have a hard time sharing, but finding a group of writers who share an interest in your chosen genre, style, or just who love writing in general can be a way to help you stay motivated, whether they’re located in your community, or afar.

If you’ve been keeping to yourself a great deal lately, as so many of us have, I encourage you to break out of your cocoon and try your wings—reaching out to others, whether electronically or at the local coffee shops as they begin to reopen—safely distanced, of course!

6. Re-visit my earlier novel for a thorough rewrite and submission.

I wrote a novel three years ago and had trouble stretching it out to novel-length.

Since then, I believe I’ve at long last found my prose voice with this latest project I’ve been working on.

So I’m going to take another look at this one to see what I can improve, now that I’m able to consider it in the fullness of time.

Then I’m going to send it out there. This one is in a totally different genre than the other, but I believe what I’ve learned while working on the latest will help in the further development of this project.

I’ll let you know how it turns out.

I saved this one until last because it’s vitally important and ensures that I stay on top of all those other things I just mentioned.

I’ve been making a real effort to maintain my calendar regarding deadlines and submission dates, and I have a datebook with places for everything that I can easily adapt to my needs.

I love checking off items that I’ve very much wanted to do, having done them. I like using Sharpies and colored pencils to add a tad of artistic flare to my calendar.

I’m getting organized and taking action steps, which leads to more checkmarks, which I like very much.

These are some ways I’m filling the gap between major, all-consuming projects.

Now that I’ve shared these with you, I’ve decided they aren’t just gap-fillers, but great habits to adopt and maintain all the time.

Here’s to a great spring filled with breakthroughs and joy in projects large and small, and everything in between.