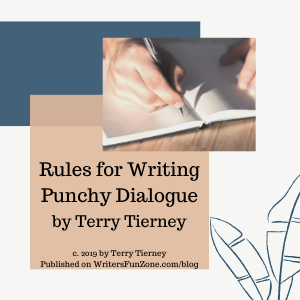 Today we welcome a new guest writer to Writer’s Fun Zone, Terry Tierney who is stopping by to chat with us about “Rules for Writing Punchy Dialogue.”  Enjoy!

Dialogue is more than characters talking about the plot of your story. Good dialogue makes your story come alive.

Before we had novels we had poetry, heroic tales, ballads, and eventually plays. Dialogue can be the best part of a story.

Conversation in a novel should sound more like a play. Think about the conversations you hear at the grocery store. There might be some interesting tidbits but overall the conversations are intrusive and pretty boring. In your written dialogue only keep the good stuff.

Each character has their own attitude, intent, distinctive point of view, and conflict. Characters think while they talk, and what they say and how they say it reveals character. Consider what each character wants to get out of a conversation. It shouldn’t be hard to tell who’s talking.

Reveal plot and backstory, but be careful to avoid exposition (sounding like a history book). Not just trading information. Characters should have a distinct interpretation or attitude about events or other characters. Don’t repeat stuff the reader already knows.

No small talk, no fillers. We all hem and haw when we talk but this “realism” tends to bog down a story, and the story should come first. Keep your dialogue short.

Not all complete sentences

People don’t always speak in complete sentences or complete thoughts. Your reader can fill in the blanks, and so can your characters. Avoid the impulse to explain everything.

Characters talk within a scene

Conversations should include distractions, interruptions, movements, gestures, expressions. Think about what’s happening around your characters.

Often what a character does not say reveals more than their words.

Especially yes and no. A character’s response should have some shading, just as a moral dilemma is often neither totally right nor wrong. Use oblique responses. Maybe even avoiding the answer.

“He said” and “she said” are common dialogue tags and they can become overused. Some options are whispered, bellowed, hollered, sniped, huffed, cooed, responded, etc. Even better, if your characters have distinct points of view, you can often omit dialogue tags, especially when two characters are talking and it’s easy for your reader to follow their interplay.

Inner dialogue is a conversation with a character’s self

Can be a short reflection within the mind of a character or a longer series of thoughts, such as stream of consciousness. In some cases a narrator or point of view character might analyze a motive or scene. Inner dialogue can be very engaging for the reader, but you should follow the rules for external dialogue and avoid making it too verbose or rambling. Try to think of inner dialogue as a story within a story.

Here are a few examples to consider.

Lady Bracknell: […] Are your parents living?

Jack: I have lost both my parents.

Lady Bracknell: To lose one parent, Mr. Worthing, may be regarded as misfortune; to lose both looks like carelessness.

This often quoted example from Oscar Wilde’s play, “The Importance of Being Ernest,” reveals character and plot elements, of course, but I also like how the responses are not what the reader or audience expects. Jack might have said, “No,” and Lady Bracknell, “Sorry,” but the play would be much less witty and engaging.

“A single man of large fortune; four or five thousand a year. What a fine thing for our girls!”

“My dear Mr. Bennet,” replied his wife, “how can you be so tiresome! You must know that I am thinking of his marrying one of them.”

The opening scene from Jane Austen’s novel Pride and Prejudice is often used as a model for setting up plot and theme. Not only is the daughters’ predicament revealed through the dialogue, but we see into the stodgy character of their father and the enthusiastic optimism of their mother.

“You just want me to go along and hold your hat?”

His hand jerked again and some ash fell off on his white cuff. He shook it off and stared down at the place where it had been.

“I’m afraid I don’t like your manner,” he said, using the edge of his voice.

“I’ve had complaints about it,” I said. “But nothing seems to do any good…. What are you offering for all this?”

“I hadn’t really got around to thinking about it.” His cheekbones were dusky red.

“Do you suppose you could get around to thinking about it?”

He leaned forward gracefully and smiled between his teeth. “How would you like a swift punch on the nose?”

I grinned and stood up and put my hat on. I started across the carpet towards the front door, but not very fast.

In this familiar sequence from Raymond Chandler’s Farewell My Lovely, private detective Philip Marlowe is considering a potential job. Note how the author concisely inscribes the visual details of the scene, particularly the actions and gestures of the client. Marlowe’s exit at the end says more than his words, conveying the impression that he wants the job but only on his terms.

Dialogue allows your characters to reveal themselves and breathe, meaning they seem more like people with their own attitudes, histories, and desires. This lets your reader connect with them more directly, rather than going through the distancing interpretation of your narrator. Sometimes a character might say something that surprises you, breaking out of the careful structure you planned for your story. Now you have something. 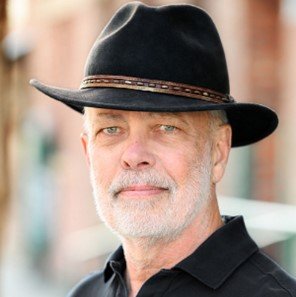 Terry has published poetry and short stories in over forty literary journals. His poetry collection, The Poet’s Garage, is coming out in May from Unsolicited Press, and they will also be publishing his novel, Lucky Ride, in December 2021. He’s a fugitive from academia with a BA in Creative Writing and a PhD in Victorian Literature, though did teach college composition and creative writing before fleeing to Silicon Valley. His website is: https://terrytierney.com.