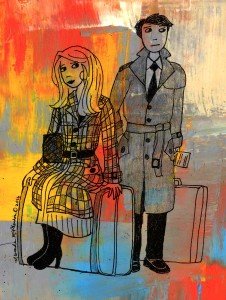 Let’s welcome back monthly columnist Nevada McPherson as she shares with us “Revamped, Revised and Refreshed.” Enjoy!

How are your writing resolutions going so far? Have you been meeting your writing goals? I’ve been working at it and succeeding to a certain extent but according to astrologers the planet Mercury has been retrograde since early January, scrambling communication, causing glitches in technology, delays for travelers and generally making it an uphill battle to get into an organized, efficient routine for making good on all those New Year’s resolutions. In other words, if you didn’t quite hit the high notes you’d planned to hit for January on your writing calendar, take heart, for Mercury has now turned forward again. Like an ocean liner changing direction however it takes some time for it to get fully turned around running full-speed ahead, so by mid-February the going should be much easier for us all.

Mercury in retrograde is not typically a great time to begin or launch new projects, but it is a great time to revise, revisit, rethink and regroup. I recently completed a major rewrite of my screenplay, Queensgate. I started writing it when I was at L.S.U. years ago after a study abroad trip to London, where I was inspired to write it, and while I haven’t been working on it all this time, I knew I would come back to it eventually.

When I completed the screenplay, trying to make a deadline for a contest (having that built-in deadline helped keep me focused and on schedule!), I was glad that version of the story was finished (for now), yet I was also a little sad to be finished because I enjoy spending time with these characters, seeing how they deal with obstacles, disappointments and triumphs and mapping out what they’ll most likely be up to next. I’m glad to now be moving forward on the graphic novel version, which allows me to visit London in my imagination on a daily basis, and I can see on the horizon a part three that hadn’t been in sharp focus before, but is now taking shape in a very definite way.

I’d always thought of this work as a trilogy, and now I can see a way forward to completing the final arc for each character’s story. Mercury retrograde is a time when you often see or hear from folks you haven’t seen in a while, a time to reconnect with old friends.  I’ve known most of these characters for the better part of twenty years, and having gone through several of life’s twists and turns myself in that time, it’s amazing how when I look back at all my work on Queensgate and my first graphic novel, Uptowners, echoes of many things that have happened to my characters have happened to me!

It turns out that working on Queensgate has been the perfect project for this Mercury retrograde. I’ll launch the first installment of the graphic novel in the next couple of months, and start a brand-new project in the spring. If you’d hoped to be launching your new novel/ graphic novel/ screenplay/ web series in the New Year and find that things haven’t happened as quickly as you would have liked, you’re in luck! Turns out you were in tune with the universe all long as you fine-tuned, revamped, and revised, Now it’s time to move forward with green lights all the way.

Originally from Georgia, Nevada McPherson lived in New Orleans for many years and now lives with her husband Bill and rescue Chihuahua, Mitzi in Milledgeville, Georgia, where she is a professor of Humanities at Georgia Military College. Nevada received a BA in English/ Creative Writing and an MFA in Screenwriting from L.S.U. She’s written over a dozen feature-length screenplays, one short screenplay, a short play, short stories and two graphic novels, Uptowners and Piano Lessons.

For more information about Nevada and her projects, visit www.nevada-mcpherson.com.