What Would Richard Branson Do? 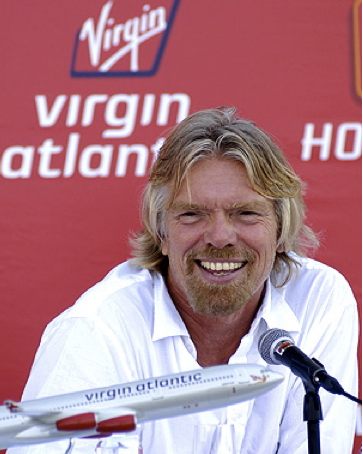 Welcome to Artist Entrepreneur Fridays, where we focus on a topic from the business and strategic perspective. This week I have another guest post from Matthew Ashdown, Book Promotion Specialist with FriesenPress, a fee-for-service self-publisher. He reminds us through the inspiring example of Richard Branson that our attitude is the key to our success.

WHAT WOULD RICHARD BRANSON DO?

Sir Richard Branson can be a truly great inspiration to writers who are reading Beth’s blog. Studying the life and minds of those who are successful, while adopting their winning attitude, is a surefire way to help us on our own way to success. Here are 4 things that Branson would tell all you writers out there.

1) “I wanted to be an editor or a journalist, I wasn’t really interested in being an entrepreneur, but I soon found I had to become an entrepreneur in order to keep my magazine going.”
– Richard Branson

If you’re wondering why I am referring to a billionaire in this blog, it is because Branson started out in the publishing industry. At the age of 16, he started up a magazine called Student. From there, he went on to create a global company and established himself as the 5th richest person in the UK. Branson realised that he had to build a business — and you do, too! You have everything within your power to be able to build it, but it depends on your attitude. Focus on the fun that you can have by getting your book done and making a business out of it. Refuse to buy into the fears of others. Many authors will act as if their book is only a hobby and then wonder why it never sells. Treat your book like a business, take lessons in business, and study successful businessmen to find out how they think. Duplicate their thinking!

2) Just recently, the holiday home of Branson was burned to the ground. When interviewed by a reporter, his response to the tragedy was: “It’s very much the Dunkirk Spirit here. We will rebuild the house as soon as we can. There’s a lot of damage, but we’ll create something even more special out of the ruins.”

A number of people may have been prone to say, “Well, he has a lot of money to throw into rebuilding, so it’s easy for him!” My answer to them is that he had to adopt this attitude before he made a lot of money — otherwise he would not have been able to succeed in the first place.

Your attitude is everything. Branson was able to maintain his cool when many others would have lost theirs.

Those who will go on to succeed in the new reality of publishing are those who can maintain the attitude of Branson which is very similar to the attitude of Yogi and Buddhist masters.

“You must stand unshaken amidst the crash of breaking worlds.” – Paramahansa Yogananda

3) “You don’t learn to walk by following rules. You learn by doing, and by falling over.”
– Richard Branson

Many know about Branson’s successful Virgin empire, but fewer know of the number of failures that he had leading up to his success. He continued until he accomplished his goals, and refused to take on the beliefs of others that guaranteed failure. Author Paulo Coelho grew up in Brazil and was warned by his family not to be a writer because he would not be able to make money. But he was so driven to write that he would not accept their warnings and now, he is one of the most influential authors in the online world.

If you have people telling you that you can’t do what you desire the most, then they are not the people to listen to. Develop a thick skin. Determine realistic expectations of publishing, and continue to strive to be the best you that you can be. Make sure you have a well written and edited book. That is your first key to success!

4) “My biggest motivation? Just to keep challenging myself. I see life almost like one long university education that I never had – every day I’m learning something new.”
– Richard Branson

It is obvious that the book industry is changing and it is challenging many of us. We can resist, or, we can go with the flow. It may be easier to cop out and not even write a book, but that is not what Richard Branson would do. He would be determined to meet his goal, challenge himself every step of the way, and be willing to let go of old ideas that no longer work.

Branson wouldn’t focus on the obstacles, but instead would focus on the end goal and will find creative solutions along the way. He has helped change many industries through his attitude. Be willing to go with the changes in the industry and you will create things you aren’t even aware of yet.

So, these are just a few things that we can learn from a man who is globally successful in many industries. Once we adopt them, we too can create many beneficial changes in our own life.