Do You Use Gender Neutral Pronouns? by Willow Woodford 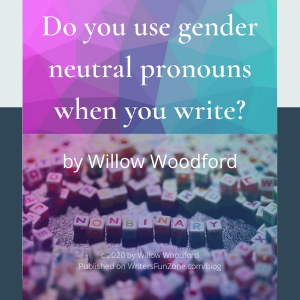 Let’s welcome back monthly columnist Willow Woodford as she shares with us: “Do You Use Gender Neutral Pronouns?” Enjoy!

Pronouns: they soften our sentences, shorten them and make them easier to read and speak. Though today I’m primarily speaking to writers. And I’m preaching to no one. I’d simply like to give you something to think about.

Photo by Julia Stepper on Unsplash

from the stool at Amy’s feet.”

from the stool at her feet.”

Seriously, do you want to read a novel written like the first one?

Photo by History in HD on Unsplash

Traditionally, humankind has been referred to in the masculine as a default. (More about this and the language surrounding it in the links at the end.)

“One small step for man
One giant leap
for mankind.”
–Neil Armstrong

Except we aren’t all men, are we?

(Neil Armstrong claimed to have actually said, “One small step for a man.” But 1960’s audio didn’t catch it. In 2006 evidence was found that he might have been right, though Armstrong himself said he couldn’t hear it.)

Photo by Sharon McCutcheon on Unsplash

As we have come to understand ourselves, and humankind, we’ve realized that there is so much more to us than meets the eye. And gender is one of those things.

Many people have come to understand that they don’t identify, in their inner selves, as male or female. Depending on how they feel or relate to the world, they may feel more comfortable with a pronoun that isn’t a part of our daily vocabulary. Yet.

I’m not going to delve into the science or cultural feelings on gender identity. I’d just like to recognize that they are a part of the society we live in.

As writers we reflect that society.

Many of us choose to include characters who don’t identify as the traditional male or female gender. I applaud you!

Culture adapts as we learn more about ourselves. And language adapts to reflect that change. One of those changes is gender neutral pronouns.

As authors, we have a responsibility to recognize and herald language adjustments. We are the ones who record them!

What are Gender Neutral Pronouns?

They are important, even if they feel strange on our tongues and in our fingers as we type.

They/Them are the easy ones. If you don’t know, just assume. You won’t be wrong, because that is as neutral as you can get.

Others include xe/xem/xyrs or ze(zie)/hir/hirs with the pattern of she/her/hers. (Read more in the links!)

Make Up Your Own Gender Neutral Pronouns

If you are writing a story you get to choose the pronouns for your gender-neutral characters. Or, even better, make them up! Just be sure to explain them if you make your own up.

I encourage you to write gender neutral characters. They are a part of the fabric of humanity. My friends’ words when we were discussing this article resonated with me.

Photo by Luca Onniboni on Unsplash

“Part of how we write is knowing who our audience is.
Thinking about it in terms of those two disparate groups
could open up some possibilities.
I mean, we talk about inclusion and everything,
but it’s easy to exclude people who aren’t there yet too.”
— Suzanne Williams

Humanity comes in many colors and forms. Let’s celebrate and write about all of them! But please be careful and purposeful in choosing the pronouns you use. Correct pronouns validate an individual’s feelings about themselves and experience with the world and show respect.

Links to hear what others are saying about gender neutral pronouns

The evolution of language

And because language is a passion of mine, here are some articles on how language forms and changes over time. Some of them explain why we used to say mankind, and why it’s changed.

Willow lives in her imagination because it’s more interesting than the real world. When she isn’t dreaming up new stories, she likes to cook, hike, and cuddle with her chihuahua. She reads voraciously, staying up far too late, and reading anywhere she can; including grocery lines, parking lots, and waiting rooms. (Except during quarantine, because she isn’t going anywhere right now!)

Her real-world counterpart, Ann Shannon, lives in New Jersey with her family and spends as much time as possible visiting her grandchildren on the West Coast.