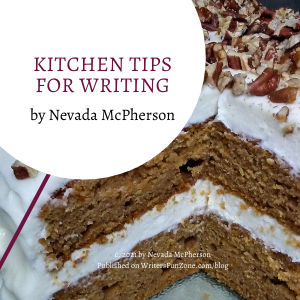 Let’s welcome back monthly columnist Nevada McPherson as she shares with us “Kitchen Tips for Writing.” Enjoy!

It’s a new year and time for new writing goals, but that isn’t what I’m going to talk about.

Even though I have those, I’m committed right now to finishing projects that are undergoing a final edit.

I do have ideas, and one resolution that I intend to see through is to act on my ideas, and the concept that “done is better than perfect.”

Tips for Writing: When is Something Done?

So how does one know when something is done?

After all, it’s impossible to apply the “bake until a toothpick inserted in the center comes out clean” rule to writing. Or is it?

Over the holidays, I’ve been doing lots of cooking and baking.

There’s wisdom in those things, and tried-and-true techniques that I’m learning to apply to other areas of my life.

I have a bad habit of coming up with great (or at least workable) ideas worthy of exploration that I sit on until the time has passed when they might have had the most impact, or until I forget about them only to realize later, “I should have done/written/posted that.”

Why do I let this happen?

Tips for Writing: Overcoming the Fear of Failure

One reason is the paralyzing fear of failure: not necessarily cosmic failure on a grand scale, which I’ll discuss in a moment, but the thought that if something isn’t perfect now it will become so in time. So I wait for the perfect time, or for the thing itself to become perfect.

In the interim, perfectly good things are sitting on a shelf undone because they may not be what I consider “perfect.”

From now on I will adhere to the mantra: “Let’s throw it up against the wall and see if it sticks,” which may sound haphazard, but which is based on a kitchen trick that I’ve used for years to excellent effect.

Tips for Writing Come From Cooking

I’ve done this for years when I didn’t set a timer, and it’s always my go-to method of ascertaining the done-ness of my pasta.

I am only now realizing that this concept has merit in my writing life.

From now on I will “throw it up against the wall” via making more submissions, sharing more posts, quotes, excerpts and comments.

I will reach out more often, connect in more meaningful ways, essentially, “just do it already,” and move on.

What happens on the rare occasions when the strand of pasta doesn’t stick to the wall?

Then you leave it to boil a minute or two more and try again, so times when something doesn’t seem to connect means back to the drawing board.

Fine. Rephrase, revise, edit and repeat. Eventually it will stick.

I’ve been making more stir-fried meals recently. I didn’t know until trying this with a recipe the other day that pressing extra-firm tofu before browning it in the pan makes it hold together far better than not pressing it.

Pressing removes the extra liquid so that it holds its shape in the pan. I’m rewarded with neat, tasty cubes of tofu that stand up to stir-frying with spicy glazing sauce and vegetables, rather than squishy, shapeless blobs.

I’m using this technique now as I finish editing my novel.

I’ve made several passes through it before, thinking I needed much more than I do, but on this pass-through, I’m seeing the bloated word-count drop as I “press” the unnecessary words, phrases, description and dialogue from this draft, leaving me with the tasty morsels, the essence of character and story: the best parts without all that squish that up until now I didn’t realize might not stand up under high heat.

There are other techniques that I’m sure I’ll be applying as the new year gets underway so I’ll share those in another post another day.

In the meantime, a word about the fear of cosmic failure that I mentioned before: that only happens on a grand scale when one never tries to do that thing that one very much wants to do, or dreams of doing.

There’s no real failure in trying to do something and not succeeding, only to try another day. That’s a temporary set-back, not a failure.

Besides, you can’t bake a cake without breaking a few eggs.

There’s no use crying over spilled milk.

There’s no such thing as perfect.